DreamForge Magazine has been an important part of my writing journey. I still pinch myself when I think back to how it all started for me. I had somehow caught on to the genesis of this publication and I was immediately drawn to the prospect of a professional-level speculative fiction magazine with a theme of hope. The publishers, Scot and Jane Noel, seemed like decent people with an enthusiastic approach to a noble concept. That’s where DreamForge and I joined forces, back around mid-2018, before their first issue.

I saw mention of the emerging magazine somewhere, I don’t know where exactly – it’s possibly a dream. I followed them on social media. I was their first Patreon supporter (I have the plaque to prove it). I coaxed my family into individually supporting them. I hijacked my dear wife’s Facebook account at the precise moment and made her their 2000th follower. I became a Kickstarter supporter. But then one day I saw a call for slush readers for another great magazine, and in fact, the first one to publish a short story of mine (Crows and Galahs) – The Colored Lens – and I thought it was time to give slush reading a go. However, I had a better idea, and went out on a limb and made a direct approach to DreamForge first.

It turns out I asked at a fortuitous time – Scot and Jane were snowed-under in their first submissions call – DreamForge was a popular idea with writers. One thing led to another and I was quickly promoted from First Line Reader to Editorial Assistant. I haven’t looked back!

The pride in supporting a noble-cause publication, the exposure to the amazing submissions from all over the world, the writerly-support from Scot, and in particular, working with a great team of First Line Readers, has made a defining year in my aspiring writing career.

And I have DreamForge Magazine to thank for it all.

DreamForge is one year in – four print and digital issues – with the promise of a full year of publication in 2020. We’ve published stories, poems, and artwork from award-winning artists and those emerging.

We are in the last week of our Kickstarter campaign to fund 2020. If you’re interested in a subscription to DreamForge, or just wish to make a donation, you can jump in. 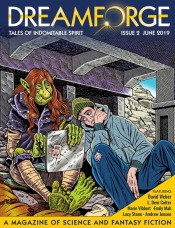 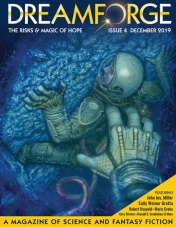 My Jim Was The Model For the Fellow On the Right

Last week I read the second issue of DreamForge Magazine.  Full disclosure.  I’ve been involved with DreamForge since it was but a twinkle in the mind of editor Scot Noel.  I’m officially the magazine’s Senior Advisor and Creative Consultant.  This is an unpaid position.

Why am I helping with DreamForge, especially at a time in my career when I have very little money or time?  Because I believe that even when—maybe especially when—the world around us seems a dark and scary place, there’s room for fiction that advocates hope.  Even more than hope, DreamForge seeks stories that advocate striving against the odds, although the dice seem weighted against you.

A short descriptive piece about my own surroundings.

High above you an eagle soars the thermals in a barren sky, wings outstretched, eyes to the parched paddock below where a mob of sheep march, laden with wool, mouths to dry stalk, against a summer wind that carries their dust trail far across the field and past the barbed wire to where a herd of cattle moan, sparrows on their backs, flies swarming, all crammed around a dam forgotten by rain. A windmill spins. The pump creaks. The rusted fence runs away into a distant salt lake, etched with memories of water, dead with skeletal trees, yet alive with pigweed, beard grass, samphire, and stonecrop.

The Australian sun pressed to your neck, sweat on the brow, sand across your legs, bitter dust in the mouth, and the scent of sun-baked earth. Feel it. Magpies warble to the click of cicadas. Wild oats rustle. Bull ants search and a bobtail stands its ground. A marri tree sighs beside you like a tired old man, sending cockatoos to flight, as shards of sunlight dance in the darkness beneath the canopy where kangaroos sleep. A crow caws, its talons in a wooden post cut a century ago, now brittle and fallen, like the land.

Family and friends, here is my Xmas request.

I’ve recently become an Editorial Assistant at DreamForge Magazine of Fantasy and Science Fiction. They are a new, professional print and electronic magazine, paying pro rates for authors. This means a lot to me on my writing path.

If you are an author, I urge you to submit qualifying stories when their submissions open again. An emerging magazine paying pro rates, and a likely future SFWA qualifying market. I’d love to see your names on submissions.

Now, those dear to me, please make a token contribution to their Patreon account. For $1 per month, you can show your support to me, or $2.50 will get you a subscription.

It’s easy to suspend disbelief with kids – they love fantasy and will believe any magical story if fun is involved.

I’ve been taking my sons to this giant banyan tree to climb for ages, telling them there is an owl asleep at the top called Mr. Hoot, and to watch out for him if he awakens – despite the impossibility of an owl in this tree and during daylight.

Fantasy entered the real world this morning. Sitting atop the canopy was an owl, awake in daylight!

I believe we create our own world.

My paranormal comedy short story, The Spirit Bar, has been bought by Theme of Absence magazine!

The story will be published on December 21.

This is the most recent story I have completed, and whenever I think if it I laugh.

Very exciting gift in the mail! Thanks Scot M Noel and DreamForge – A Magazine of Fantasy and Science Fiction. A gift for being their #1 (first) Patreon supporter. An ideologically-uplifting magazine I aspire to be included in. #dreamforge

Another day, another book in the mail!

I have a bucket list of classic books to read. ‘Boz’ is one of my favourite authors. I’m also currently reading a sixty-year-old edition of ‘A Tale of Two Cities.’

It’s time to celebrate! After months working on my short story, I finished it today, and started submitting (watch this space!)

Time to reward myself with a book. I don’t read novels while I’m writing (a form of procrastination), so this is a treat.

I’ve been working my way through the classics (bucket list), and today I’ve started a novel older than me by a factor of 1.5 – Catch-22.

I found the purrfect companion to this vintage red book – red wine!

I’ve just finished the handwritten version of what will be the eighth draft of my current short story.

It’s a long road trying to make it my best.

My short story writing process involves handwriting a draft with pencil and then typing it out (involving more changes). Then I go through a thorough editing process, and by about the forth draft I involve beta readers and/or paid editors. With each new draft I completely re-write the whole thing, starting with the pencil.

This story is a good 4,000 words, so once I’ve typed this again, considering my rub-outs and strikes of the delete button, I would have laid down a good 70-80,000 words. More than enough for a whole novel.

We all have our own processes that work for us individually, but this is mine – thoroughness and constant whole-re-writes. Using pencil and the repetition of re-writing helps me memorise the story, and I find pencil far more creative.

I won’t mention how long I’ve been working on this one, but it’s on the far side of solid few months.

And each time I finish a draft, I’m like, “Okay, it’s perfect now.” Then it comes back from the reviewers …

This is a text widget, which allows you to add text or HTML to your sidebar. You can use them to display text, links, images, HTML, or a combination of these. Edit them in the Widget section of the Customizer.